Every young musician has someone they look up to. For most, that established artist becomes a mentor through a recording on an album or an image on the television. So for Ken Marvin and Brian Gentry, having the chance to work with a hero from their youth for more than two decades still seems surreal.

“We both loved America from the time they first released Homecoming,” said Ken Marvin. “To this day, when I’m working out harmonies, I still try to channel America, Crosby, Stills & Nash or Art Garfunkel.”

“Somehow, along the way, we formed a close relationship with Dan Peek, who was a founding member of America,” continues Gentry. “Dan had already left America and was a successful solo artist in the Christian market. He had recorded a couple of our songs (one of which went on to make his Greatest Hits Collection). He liked what we did, and we ended up working with him until his untimely death in 2011.”

Under the band name, Peace, Marvin and Gentry recorded and released three albums working with Peek.

So it’s no surprise that the duo’s new album, Songs from Gholson Road, is an extension of where they left off when Peek unexpectedly died in 2011. The same rich harmonies and smooth vocals associated with America (and bands like The Thorns, The Jayhawks, CSN&Y and The Beatles) anchor songs like “Pieces of Julie,” “Wishful Thinking” and “Take Me There.” 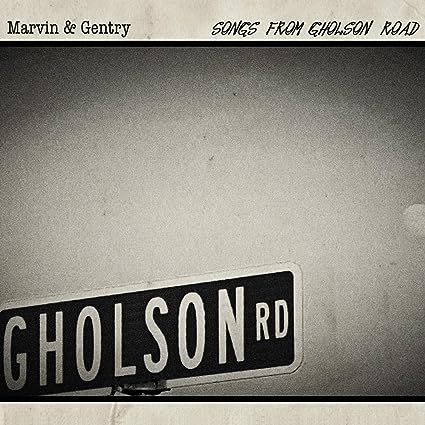 “This is the culmination of years of work that we put down,” said Gentry. “For us, Songs from Gholson Road is our way of being the torchbearers of his legacy. He invested his friendship and time and talent in us. In his very last interview he was quoted as saying ‘these dudes deserve to be heard.’ He believed in us.

“Dan was more than a musical influence and collaborator,” Gentry continued. “He was a great friend. He was there for us through many ups and downs. We worked actively with him up through the early 2000s. It was a magical time for us.

“Since his death we have been going through the archives, thanks to Catherine (his widow), and have been entertaining the idea of someday releasing a Best of Peace compilation. For now, we just finished remixing a single called PEACE ‘Right Now,’ which is available as a download at marvinandgentry.com. It features Paul Winkler on drums and some additional backing vocals. Chris Brush engineered and mixed the single here in Nashville 2018.” (UPDATE-NEW 15 SONG CD PEACE REVISITED AVAILABLE NOW):

The West Kentucky duo of Marvin and Gentry, first began working with one another as students in high school. Gentry wanted to be part of Marvin’s band, and the more established Marvin opened his door to the 16 year old trying to develop his craft.

“He was my sounding board and helped me hone my skills,” said Gentry. “Ken’s a couple of years older than me, and at first told me to keep my day job-ha! But we loved the same music and found common ground right away. We’ve been good friends forever.”

Since those early days, Marvin and Gentry have earned nominations for Best Group/Duo at the 2015 11th Annual International Acoustic Music Awards (IAMA), for their song "Wishful Thinking." In addition to the award, the song is featured on a compilation CD with the other winners distributed to Sirius XM and other radio stations and web networks.

Influenced by such great songwriters as Simon & Garfunkel, Lennon and McCartney, Crosby Stills Nash and certainly Young, the duo of Ken Marvin and Brian Gentry, both from Kentucky, have been writing and recording together since the late 1980’s. While the vocal harmonies and performance style of the duo can be traced to these and other great songsmiths of that era, it is the Christian market where the two realized early commercial success.

Marvin & Gentry plied their songwriting craft with live performances in college auditoriums across the country in the ‘80’s where the duo found acceptance of the Marvin & Gentry melodious style and spirit-filled message to wider audiences. It was the discovery by Dan Peek of the band, AMERICA, that would lead to a collaboration of the duo’s next four recordings and the formation of the Christian folk-rock band, PEACE. Peek, who had a string of hits with AMERICA, found in Marvin & Gentry a kindred spirit and recorded two of their songs on his solo record titled Crossover. The hit song "I Will Not Be Silent" went on to make Peek’s Greatest Hits. Soon after, Marvin & Gentry released their first recording, Safe Harbour on Milk and Honey Records in 1987. With Safe Harbour, they were able to land their first hit in the Contemporary Christian charts with their song "Cowboy Stories." As one critic wrote in Bookstore Journal after the release, “Safe Harbour bears an uncanny resemblance to the musical styles popular 20 years ago, but such timeless music should appeal to listeners of all ages.”

In 1989, Dan Peek, along with Marvin & Gentry, produced the duo’s second studio effort, Light of the World. The collaboration continued for another six years as Peek, on his new label, 7 Mile Records, releases a trilogy of recordings by PEACE, the band formerly known as Marvin & Gentry: Stronger Than You Know (1994), Peace (1997) and the critically-acclaimed Under the Mercy (2000). The trio of recordings stand as great synergy of the talents of Peek, Marvin and Gentry and combines the fresh, refined lyrics of Marvin & Gentry but with recollections of the soft rock and pop sound of Peek’s AMERICA. The three recordings are an incredible contribution to the music of the ‘90’s, a decade where much of the music is considered less than positive.